Stink bugs are primarily an agricultural pest, but during late summer and early fall they enter our homes in search of shelter for the winter. These nuisance pests won’t cause structural damage or spread disease, but they will emit a strong pungent odor that gets worse when you handle or crush them.

The best way to stop an infestation is to keep stink bugs from entering your home in the first place. These pests gravitate towards light and warmth, so if you notice them gathering on the sunny exterior walls of your home, contact Nature’s Way for a free inspection right away.

Our stink bug pest control technicians are trained to manage infestations, and will customize a treatment and prevention plan for your unique situation. Stink bugs can be difficult to remove once inside your home, so prevention is key.

The best time to treat for stink bugs is between August and October. Our stink bug exterminators generally start by identifying possible stink bug entry points, and provide recommendations for sealing cracks around windows and doors with weatherstripping, caulking any gaps in the siding, and installing or repairing screens, especially in attic vents or crawl spaces.

We then apply an exterior treatment to your home around possible stink bug entry points, and, depending on the initial inspection and degree of infestation, a second application may be needed. For stink bug infestations inside the home, interior treatments, traps and removal methods may also be used.

Get Started with a Free Stink Bug Inspection

If you need a stink bug exterminator in Albany, Saratoga, Glens Falls or as far north as Plattsburgh NY, call (518) 745-5958, or complete an online request for a free inspection. You can also contact our stink bug control experts in Rutland, Burlington and throughout Western Vermont by calling (802) 855-2978. 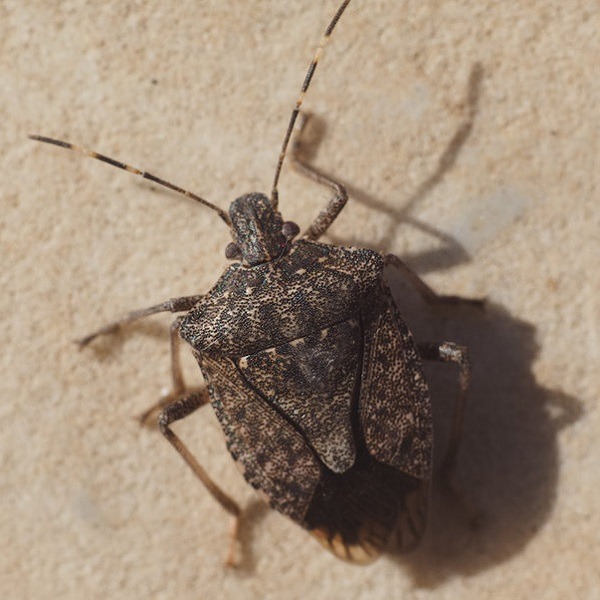 The brown marmorated stink bug is the most common species of stink bug in New York and Vermont. However, it is not native to this region. It is an invasive species that was accidentally introduced from east Asia in the 1990s, probably in a shipping container. These pests are shaped like a shield with brown mottled coloring, and the adults are approximately the size of a U.S. dime. Newly hatched nymphs have dark red eyes and a yellowish abdomen with mottled black and red coloring, while older nymphs are darker with black and white bands on their antennae and legs.

Brown marmorated stink bugs are considered an agricultural pest, mainly in the mid-Atlantic region, where they cause significant damage to fruit, vegetable and field crops. Fortunately, these stink bugs do not cause structural damage, and they do not bite or sting, so they are not harmful to people or pets. However, a small percentage of the population may experience an allergic reaction to the stink bug’s odor.

Here in northeastern New York and western Vermont, the brown marmorated stink bug is mostly a nuisance pest. They seek shelter inside our homes for the winter, and give off a pungent odor when crushed or sucked up by a vaccuum, making it hard for home and business owners to get rid of them on their own. If you suspect you have a stink bug problem, please contact us, so that we can provide you with a free inspection and advise you on the best treatment plan for your property.