If you’ve got an infestation of red beetles with black spots, they’re probably not ladybugs, but their close relative the Asian lady beetle. Although ladybugs and Asian lady beetles look similar, and belong to the same insect family, they behave very differently.

Ladybugs are highly beneficial, harmless insects that eat garden pests, such as aphids. They don’t bite, they never congregate in large numbers, and when it gets cold, they rarely seek shelter inside homes. On the other hand, Asian lady beetles tend to gather in large groups around warm, reflective surfaces, such as windows, and they will attempt to enter your home for shelter in winter. They also bite, and leave yellow, foul-smelling residue wherever they gather.

If you suspect you have a problem with Asian lady beetles in New York or Vermont, contact Nature’s Way Pest Control for a free inspection.

Our pest control technicians are trained to identify Asian lady beetles, and manage infestations. Since every situation is different, we will inspect your home or business and design a unique removal and treatment plan.

Methods may include sealing gaps and cracks where ladybug beetles can enter your home, applying insecticides, installing insect light traps in attics or other dark places, and using HEPA filter vacuums to remove pests. 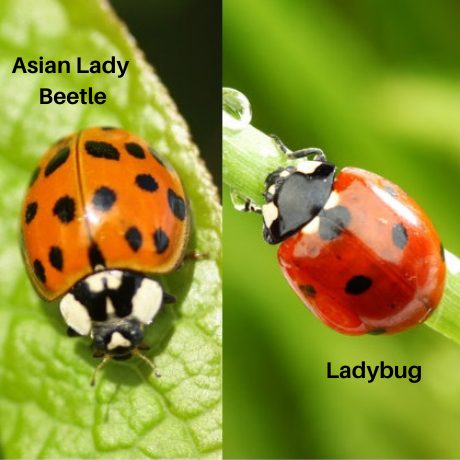 Asian lady beetles vary from orange to bright red in color with black spots. However, they are larger than ladybugs with a more pointed head, or snout. Like the ladybug, they have black heads with white markings, but most Asian lady beetles have distinct markings that form what appears to be an “M” or “W” on the head.

Asian Lady Beetles Inside Your Home

Asian lady beetles use pheromones to “call” each other, allowing for the large gatherings that are often seen in the fall. In northern parts of New York, such as Albany, Saratoga, Lake George and Plattsburgh, Asian Beetles enter homes in search of shelter for the winter. They use crevices and other cool, dry, confined spaces to hibernate, and significant numbers may congregate inside walls if given a large enough opening.

Although they hibernate in the cooler months, Asian lady beetles will wake up and move around whenever the temperature reaches 50 °F. They frequently congregate in sunlit areas because of the heat available, such as windows and dark screening. These large populations can be problematic, forming swarms and lingering in an area for a long time. They also have good eyesight, and will return to the same area if removed.

Asian lady beetles, like other ladybugs or ladybirds, use isopropyl methoxy pyrazine as a defensive chemical to deter predators, but in much higher concentrations than other species. These insects will “reflex bleed” from their legs when agitated, releasing hemolymph, a fluid equivalent to blood in most invertebrates. The liquid has a foul odor, similar to that of dead leaves, which can cause stains. Some people have allergic reactions to the hemolymph, including allergic rhino conjunctivitis.

Asian lady beetles may also bite humans, presumably in an attempt to acquire salt, or if provoked. These bites are normally harmless, causing only minor irritation. Although many people feel a pricking sensation as a lady beetle walks across the skin, and a small number of people are allergic to bites.