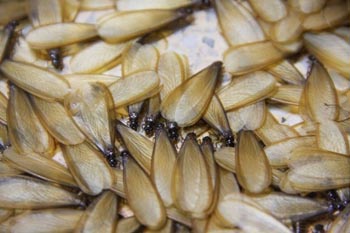 The term termite swarm can conjure up all kinds of horror film images, like a horde of termites moving into your neighborhood with the intent to eat up every building on the block! Luckily, a termite swarm isn’t quite that menacing, but it’s certainly not pleasant.

Swarms are actually quite common in the insect world. Killer bees swarm – collectively, via instinct, not consciously – with the intent to harm in the event that their hive is attacked. Even honey bees swarm when they’re looking for a new nest, but they’re docile and unlikely to sting as they hunt for a new home for the queen. Termite swarms, however, are neither aggressive nor docile. They are simply frenetic.

A termite swarm occurs when many termites fly from their underground nest simultaneously in order to find a mate and to look for new food sources and a site for a new colony. Swarms usually take place in spring or early summer in Albany and the Adirondacks, and they only last about 30 minutes. While the swarms can fly at a height of about 600 to 900 feet, termites don’t fly well, and so they usually don’t go far, unless they catch a good breeze.

Not every termite finds a mate, and many members of the swarm don’t survive the flight because they die of natural causes or are eaten by birds, bats or larger insects before they find a new nest site. However, once the “royal couple” has mated, they burrow into the ground and the queen begins to lay her eggs.

Termites can – and do – swarm in homes, especially if your home is located on or near a termite colony nest. The termites will not harm you, but the frenetic experience of a swarm can be very unsettling.

If a termite swarm occurs inside your home, the termites will immediately head for your windows and glass doors, because they’re expecting to leave their underground colony and find themselves outdoors. They don’t want to be inside your home any more than you want them there. They’ll lose their wings in just a few minutes and, since they can’t get back into the ground, they’ll die relatively quickly.

What to Do if You Experience a Termite Swarm

As hard as this may be to believe, you don’t need to do anything during a termite swarm. It’s useless to spray insecticide in the wall or foundation holes from which the termites emerged. Their need to swarm is so great that they’ll return until the entire colony has left the ground. The best thing to do is to wait until they die, clean up the mess, and then give us a call at Nature’s Way Pest Control.

Unfortunately, you may experience several swarms over a period of days, so it’s important to get our termite exterminators in there as soon as possible. If you wait until summer or fall to call in the pest control experts, the termite colonies will start creating a new generation of swarmers, and establish what is known as “swarm castles”, and the termites will emerge again next spring.

Due to the urgency of termite swarms, we recommend calling (518) 745-5958 to schedule an appointment, however, you can also contact us online.