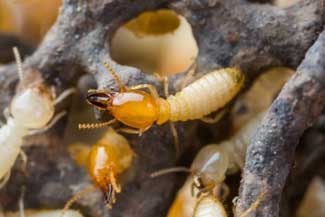 There are more than 4,000 different types of species of termites in the world, but for this article, we’ll concentrate on the four major groups of termites that make their home in the United States.

The Eastern Subterranean termite is probably the most common type of termite in all of New York (and is likely the pest that’s eating up your home). These termites thrive throughout the eastern portion of the U.S., from Florida to Maine. They’re also found as far west as Utah.

These termites really love to destroy Douglas Fir and other timbers used in building homes. They eat the internal sections of a building’s structural timbers. Experts estimate that one in five homes in the areas in which these termites thrive will be attacked at some time by these insects.

The Dampwood termite, while larger than their subterranean counsins, loves the damp – sometimes decaying – wood that they use to nest. They usually don’t nest in soil, but invade wood that is on the ground, particularly if it’s in the process of decay. They’re common on the West Coast, where they’re considered an “economic pest” (meaning they have great destructive effect on homeowners and businesses).They also can be found in the deserts of the Southwest and even in southern Florida.

The Drywood termite needs to have no access to the ground at all. These pests are the ones you’ll find in your attic or where it’s dry – they don’t need much moisture. They also sometimes will go for cellulose material, such as books, furniture and dried plants. They’re found most frequently in the Southwest and in coastal and southern states.

Formosan termites are a type of subterranean termite. They tend to create nests in soil and will invade your home from structures also in the soil, such as foundation posts, etc. They can also use mud tubes that they build. These termites are not native to North America; they migrated to the U.S. from East Asia in the 1940s after World War II via port cities and have since expanded their reach throughout the country. Many experts believe that Formosan termites can move about the country via wooden railroad stakes.