One of the more successful variants of arachnid in the world, the wolf spider can be found in all but the most polar regions of the world, including the coasts of Greenland. What gives the wolf spider its tremendous range is that the various genii as a whole are not reliant upon webs for snaring. Instead, the wolf spider is a fast, sight-reliant ambush predator that actively hunts for its food. If the element of surprise is botched, some species of wolf spider have been known to give chase anyway, attempting to run down its quarry by sheer force of locomotion. Others simply go back to hiding and wait for the next mark. This grants the creature immunity to the pounding snows that cause web-reliant spiders to be incapable of adapting to the most polar of climates. 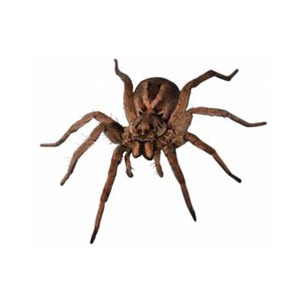 While some species of this spider make their homes in twisted burrows of their own design, others rest topside in the tall grass of prairies, meadows, and the like. Regardless of their sleeping habits, wolf spiders all make use of extensive camouflage, a clear departure from the flashy coloration of many spiders that live their lives touting extensive toxic properties for all the world to see. Nearly universally nocturnal, the various species of wolf spiders can be readily identified by the pattern of their eyes. Some species of spider sport eight eyes of equivalent size. This is not the case when it comes to the wolf spider; they instead sport two primary eyes with six smaller ones in rows above and below these primaries. These large eyes make the wolf spider easy to identify, as the sheer size of their main eyes is enough to produce noticeable eyeshine if a light is shone upon them at night.

Though its large size and hairy body bring forth images of the deadly tarantula in the minds of the uninitiated, there is no need to fear. Upstate New York and Vermont are not home to any particularly venomous spiders, despite any perceived similarity to spiders that legitimately are.