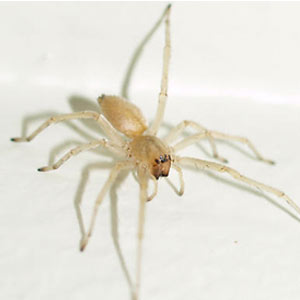 We’re not going to mince words here: the sac spider may be a light, cheery yellow in color, but this creature has fangs – and knows how to use them!

These arachnids can’t spin large webs, so they make small sacs to protect their young and themselves (hence, their name).

Sac spiders tend to build these nests on indoor plants (which is partially why their bite is relatively common – human hands often make their way to an indoor plant). Such plants also attract easy insect prey (again, the spider doesn’t weave a web, so it can’t catch dinner that way). The sac spider gets its meals by going after small insects. Their chase is somewhat comical, as they’ll run after the prey quickly all the while waving their forelegs before them.

They inject their victim with their venom, a substance that contains cytotoxin, one that kills cells (and thus their small prey).

As for the sac spider’s bite, it can be nasty. Its venom is considered moderately poisonous to humans, causing large round and itchy welts on the skin where the spider struck. Bites tend to heal quickly.

You’ll know you’ve been a victim of the sac spider because you’ll feel a quick stinging sensation, quickly followed by mild swelling and redness around your wound. The spider’s bite can break and blister, but this doesn’t occur often. Which is a good thing, because this sore can take a few weeks to heal.

Sometimes the victim will feel a bit ill.

If you find one sac spider (either by seeing it or experience the clamp of its fangs) you can be assured that there are more. In addition, a female sac spider can lay up to 30-40 spider eggs at a time and will do so several times and quickly so in her lifetime.

If you’ve discovered one or more sac spiders, contact the pest pros at Nature’s Way Pest Control. We use only botanical solutions to rid your home of crawling pests safely.