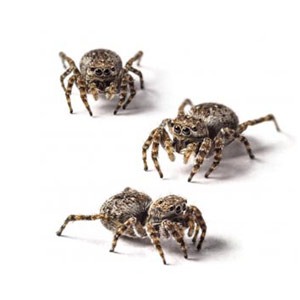 Spiders are critically important to the Earth’s ecosystem because they keep the insect population under control.

These spiders are known for their exceptionally large eyes (large for spiders) and “furry,” rectangular face. These spiders definitely have faces only their mothers could love.

These spiders have four pairs of eyes, with the largest pair smack dab in the middle of their forehead. These eyes are of great benefit to jumping spiders: it’s believed they have the best eyesight of all spiders and use it to great advantage for hunting, for getting around and for courtship.

The tend to jump only when on the hunt or when startled.

Still, that’s small comfort when one of these spiders jumps in front of – or even on you. It’s small comfort that they do tend to be small in size: the body part of jumping spiders can range between 1mm and 22mm (up to .8 inches) although having a larger jumping spider in your field of vision can be, well, disconcerting.

Some people erroneously believe that jumping spiders can fly. This is due to the fact that, for their size, they jump very high indeed: up to five times the height of a human! Jumping spiders also are the bungee jumpers of arachnids: right before they jump, they attach a single strand of silk as a dragline so in case they miss their mark, they just dangle for a bit and then climb up the strand.

The good news is that a jumping spider’s bite is not poisonous to humans (unless you have an allergy to spider venom). The area surrounding their bite does swell and becomes itchy (similar to that of a wasp’s sting). If bitten, wash the bite and apply antibiotic ointment. It’s always wise, however, if you can’t identify the spider that bit you, or if you’d just like some reassurance, to see your physician after any spider bite.

Like most things smaller than humans, jumping spiders will do all they can not to cause you any trouble personally. That is, if you get a bite it’s probably because you startled the spider, or it felt threatened and in danger.

If you find a jumping spider in or near your home, it’s more than the likely the Daring Jumping Spider (Phidippus audax). They tend to be bright blue or green in color and its body ranges in size from half an inch to a bit more than three-quarters of an inch.

They tend to hang around outside the home (they don’t make webs to catch food, but do build them to store their eggs and to hang onto when they want to hide) in fields and grasslands.You might find them on exterior walls, fences and in your garden. They also tend to like flat vertical surfaces, the better to see and chase down yummy insects.