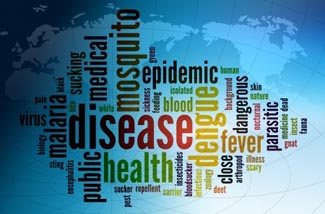 The mosquito is a major pest. And not just because its bites can become red and itchy and make a summer’s day enjoying nature an unpleasant experience.

Mosquitoes can carry several dangerous diseases. While the United States has done an excellent job of eradicating some of the most dangerous of these, the threat that mosquitoes carry here is nothing to ignore or downplay.

Perhaps the most serious disease risk to Americans comes via the mosquito-borne West Nile Virus. Only about 70 to 80 percent of those people who are infected with the virus develop any symptoms, which can include headache, sever body aches, pain in the joints, vomiting, and diarrhea/rash. Most of those who come down with these symptoms recover quickly, but can feel weak and fatigued for weeks or months.

Other serious mosquito-borne diseases include:

Virtually all of these diseases are extremely rare in the U.S. (with the exception of West Nile), although the Centers for Disease Control (CDC) recently reported that about 75 cases of Dengue Fever appeared in Florida in 2009 and 2010 and two have been reported so far in 2014.

To protect yourself and your loved ones from mosquito-borne diseases and infections, the CDC recommends the following: