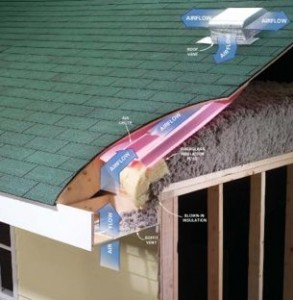 Molds are found everywhere inside and outside, and can grow on almost any substance when moisture is present. Molds reproduce byspores, which can be carried by air currents. When these spores land on a moist surface that is suitable for life, they begin to grow. Mold is normally found indoors at levels that do not affect most healthy individuals.

Because common building materials are capable of sustaining mold growth, and mold spores are ubiquitous, mold growth in an indoor environment is typically related to water or moisture indoors. Mold growth may also be caused by incomplete drying of flooring materials .

For significant mold growth to occur, there must be a source of water (which could be invisible humidity), a source of food, and a substrate capable of sustaining growth. Common building materials, such as plywood, drywall, furring strips, carpets, and carpet padding are food for molds. In carpet, invisible dust and cellulose are the food sources (see also dust mites). After a single incident of water damage occurs in a building, molds grow inside walls and then become dormant until a subsequent incident of high humidity; this illustrates how mold can appear to be a sudden problem, long after a previous flood or water incident that did not produce such a problem. The right conditions reactivate mold. Studies also show that mycotoxin levels are perceptibly higher in buildings that have once had a water incident (source: CMHC).

Mold colonies can grow inside building structures. The main problem with the presence of mold in buildings is the inhalation of mycotoxins. Molds may produce an identifiable smell. Growth is fostered by moisture. After a flood or major leak, mycotoxin levels are higher in the building even after it has dried out (source: CMHC).

Food sources for molds in buildings include cellulose-based materials, such as wood, cardboard, and the paper facing on both sides of drywall, and all other kinds of organic matter, such as soap, fabrics, and dust containing skin cells. If a house has mold, the moisture may be from the basement or crawl space, a leaking roof, or a leak in plumbing pipes behind the walls. People residing in a house also contribute moisture through normal breathing and perspiration. Insufficient ventilation can further enable moisture build-up. Visible mold colonies may form where ventilation is poorest, and on perimeter walls, because they are coolest, thus closest to the dew point.

If there are mold problems in a house only during certain times of the year, then it is probably either too air-tight, or too drafty. Mold problems occur in airtight homes more frequently in the warmer months (when humidity reaches high levels inside the house, and moisture is trapped), and occur in drafty homes more frequently in the colder months (when warm air escapes from the living area into unconditioned space, and condenses). If a house is artificially humidified during the winter, this can create conditions favorable to mold. Moving air may prevent mold from growing since it has the same desiccating effect as lowering humidity. Molds grow best in warm temperatures, 77 to 86 degrees Fahrenheit, though some growth may occur anywhere between 32 and 95 degrees. 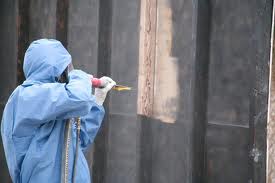 Removing one of the three requirements for mold reduces or eliminates the new growth of mold. These three requirements are 1) Moisture, 2) Food source for the mold spores (dust, dander, etc.), and 3) Warmth (mold generally does not grow in cold environments).

The first step in an assessment is to determine if mold is present. This is done by visually examining the premises. If mold is growing and visible this helps determine the level of remediation that is necessary. If mold is actively growing and is visibly confirmed, sampling for specific species of mold is unnecessary.

These methods, considered non-intrusive, only detect visible and odor-causing molds. Sometimes more intrusive methods are needed to assess the level of mold contamination. This would include moving furniture, lifting and/or removing carpets, checking behind wallpaper or paneling, checking in ventilation duct work, opening and exposing wall cavities, etc.

Careful detailed visual inspection and recognition of moldy odors should be used to find problems needing correction. Efforts should focus on areas where there are signs of liquid moisture or water vapor (humidity) or where moisture problems are suspected. The investigation goals should be to locate indoor mold growth to determine how to correct the moisture problem and remove contamination safely and effectively.