Ticks are parasites that feed by latching on to an animal host, imbedding their mouthparts into the host’s skin and sucking its blood. This method of feeding makes ticks the perfect vectors (organisms that harbor and transmit disease) for a variety of pathogenic agents. Ticks are responsible for at least ten different known diseases in humans in the U.S., including Lyme disease, Rocky Mountain spotted fever, babesiosis, and more recently, anaplasmosis and ehrlichiosis. 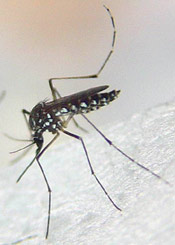