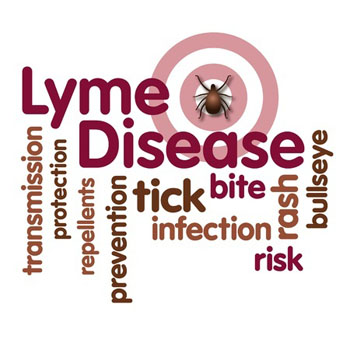 Lyme disease is a serious condition. While it’s not necessarily life threatening, it will make one’s life very difficult and uncomfortable.

Symptoms of Lyme disease include a red rash that expands outward from the bite’s location. You also can come down with chills, fatigue, fever, headache, swollen lymph nodes, and muscle/joint aches. The fatigue and aches can be debilitating. The fever is no picnic, either.

Most symptoms appear within three to 30 days of infection, although some people don’t present symptoms for months after being bitten.

Between 70-80 percent of those infected will present what is known as the “bulls eye rash”.

If the preliminary symptoms mentioned above aren’t treated, a victim of Lyme disease also could present additional – and much more serious – symptoms:

Some patients (the CDC estimates the number to be 20-30 percent) of those who get Lyme disease may have symptoms that can last for months or even years after treatment, even after being treated with antibiotics. Symptoms can include joint and muscle pain, sleep disturbance/fatigue, even cognitive defects. This condition is known as Post-treatment Lyme disease syndrome (PTLDS) and they are not believed to be caused by any ongoing infection of the Lyme disease virus.

Instead, they are believed to be caused by an autoimmune response, in that the patient’s immune system continues to respond to the virus, causing damage to the body’s tissues, even after the infection has been treated and removed. The good news about PTLDS is that it tends to occur more in patients who were diagnosed with Lyme disease a few months after infection (thereby delaying treatment).

Treatment for Lyme diseases involves taking antibiotics by mouth, such as cefuroxime axetil, amoxicillin, or doxycycline.

To prevent Lyme disease, if you’re going to spend a good amount of time outdoors in the summer months (when ticks thrive), wear light colored clothing (so that it’s easier to see a tick and then brush it off). Wear long sleeves and long pants and tuck your pants into your socks or shoes. Wear a hat.

Mosquito repellants with DEET are somewhat effective against ticks, but it’s better to use a repellant that’s specifically formulated for use against ticks, such as one containing permethrin.

After hiking or walking in grassy or wooded areas, perform a tick check on all parts of your body. Ticks tend to like warm, moist places, so check in your groin area, under your breasts (women), between toes and fingers and behind knees and in your hair/on your scalp.