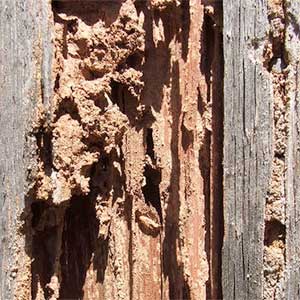 Did you know that, as bad as a termite swarm feels when it’s happening in your home, if you just wait about half an hour, the termites will die? (All you need to do now is clean up their tiny carcasses and call Nature’s Way right away to stop a second swarming incident before it takes place.)

Read below for some more “interesting facts” about termites.

What the heck is this swarm thing you just mentioned?
Termites live in colonies underground. Sometime during the year, the younger termites will – simultaneously – fly from their nest via mud tubes they’ve created for just this purpose – to mate and locate a new nest site and sources of food. If your home happens to be on or near a termite colony’s nest, they could swarm in your home.

OMG! How long does a swarming episode last? Swarms tend to last only about 30 minutes. They tend to take place in spring and early summer. Since termites don’t fly very well, many won’t make it to a new nest. If they enter your house first, all bets are off and most won’t make it.

Good golly! Do they bite? Am I in danger?
No. Termites do not bite. About the only risk you and your family may be in during a swarm that occurs in your home is, well, just being there in the middle of a swarm as the termites frantically look for a way to get to the outside.

That’s just gross. Plus they eat the wood in my home. We should just get eradicate all termites!
Not so fast. While termites can and do destroy a home’s wood and wood superstructure, they actually are important decomposers ecologically. They break down plant fibers and recycle dead and decaying trees into soil (in wooded areas), so they’re actually vital to the health of woodlands and forests. It’s not their fault that we humans build our home out of their food (wood).

Unpleasant fact:
If your home has one colony of termites, it probably has another two or three around it. What’s more each colony may have up to 1 million termites within it!

Are termites everywhere?
Pretty much. They’ve been found in all states in the U.S. except Alaska. There are more than 2,700 species of termites in the world, with 40 of them living here in the United States.

How long can a termite live?
The termite queen can live from 15-25 years. What’s more, she can lay an egg every 15 seconds. Worker and soldier termites, on the other hand, live just one to two years. Only the queen mates and lays eggs.

Do you need to get rid of termites in your home or office? Nature’s Way Pest Control can help. Since, 2001, we have been providing top quality pest control services in Upstate New York and Vermont at the best rate. We use the top of the line, most environmentally friendly products available. Contact us today at (518) 745-5958 or fill out our form online to your FREE inspection.