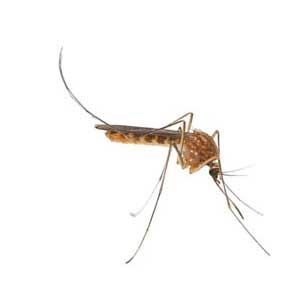 Why do mosquitos bite humans?
Mosquitos bite other mammals in addition to people. Only female mosquitos go after mammals (male mosquitos don’t bite) in order to let their eggs mature before laying them. The females actually take no nourishment from the blood; like males, females get their energy from plant nectars, similar to honeybees.

Why do mosquitos love me (bite me more) and never bite someone else? How did those other people get so lucky?
No one really knows why mosquitos bite some people and ignore others (although scientists – and insect repellant makers – are researching this). Carbon dioxide is known to attract the females and they’ll zig zag within the plume to locate its source. Once close to a potential victim, the mosquito will take in other clues, such as body odor, lactic acid and sweat, and even heat. Microflora found on everyone’s skin also are an attractant – or repellant. Researchers have found more than 350 compounds within these odors produced by human skin, each of which could attract or repel the pest.

I’ve heard that people who exude a lot of B-12 don’t get bitten.
We love cheese and so we wish that were true (cheese is high in vitamin B-12) but researchers have found that taking more B-12 and eating garlic and foods or substances believed to have an effect on mosquito behavior have no impact on whether or not a mosquito will bite.
Neither does eating a banana attract a mosquito, although wearing perfume has been found to do so. People drinking beer also are more attractive. Limburger cheese also attracts mosquitos (which may be why mosquitos like to feast on human feet).

Which insect repellant works best?
A repellant with DEET (N,N-diethyl-3-methylbenzamide). Developed by the U.S. Department of Agriculture and brought to public use in 1957, DEET is effective against a host of pests including mosquitos, fleas, biting flies, and chiggers.  As for DEET’s safety, the American Academy of Pediatrics says that anyone over the age of two months can use a DEET-based repellant with up to 30 percent concentration of DEET. Repellants have a DEET concentration starting at 5 percent and moving up to 100 percent. If you’re going to spend some time in your backyard, a concentration of 10 percent should do the trick (for about two hours). Hiking outdoors? Move up to 20 percent or even 30 percent concentration.

I’m wearing long sleeves, long pants and socks. Do I still have to spray with a DEET repellant?
It’s a good idea. After all, your hands, neck and face probably still will be exposed. What’s more, mosquitos can bite through clothing, so it’s wise to spray your clothing, too. Don’t spray your skin under the clothes, however, and never spray directly on your face. Instead, spray or place the repellant on your hands and wipe it gently on your face.

How can I lessen my chances of being bitten?
In addition to wearing long sleeved shirts, pants and wearing socks when outdoors, use DEET repellant and try to avoid outdoor activities during dawn and dusk, when mosquitos are most active. It’s also wise to drain any standing water (in birdbaths, gutters, pails, old tires, etc.) as mosquitos like to lay their eggs on standing water.

Do mosquitos do any good at all?
In human terms, probably not. But as far as nature goes, mosquitos have been around for millennia and to remove them from the eco-system would only result in something else filling the void they leave behind – and that species could be worse!