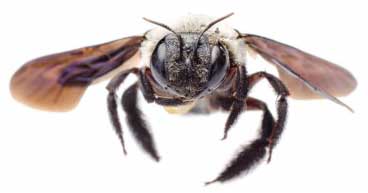 The female carpenter bees are the ones that build the nests for the community. They perform this by tunneling into the wood and creating a hole in which the other bees can live. The carpenter bee is not a widely social being. Some species may form very small social circles, while others will remain mostly solitary.

Carpenter bees are mostly harmless. Their intention is not to hurt human beings. To ensure that a person is not stung by a female carpenter bee, that person should remain calm when facing one and avoid waving the hands or making other intimidating movements.